Stuck on the Tracks 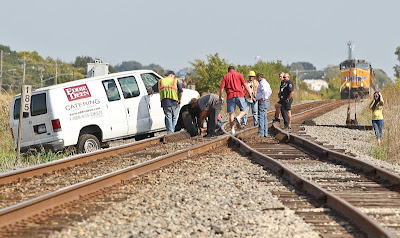 Traffic was tied up on the west side of Terrell for a while this afternoon after an Eddie Deen's catering van veered off of Highway 80 and became stuck on the railroad tracks. According to a company representative, the driver of the van was not injured.
An oncoming train stopped before hitting the van. The train blocked F.M. 148 until the van was removed around 3 p.m.
Posted by Don J at 1:07 PM